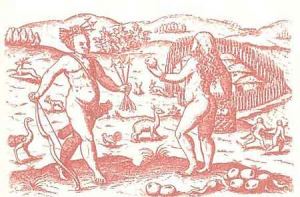 Together with maize and cassava the tomato is the predominant element in the diet of those people who inhabited the area between Mexico and Peru. 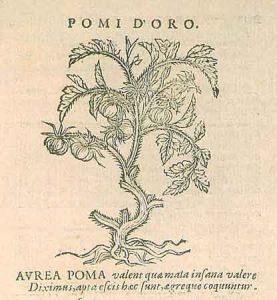 The first examples of the tomato which arrived in the ‘old world’ on the ships of the Spanish Conquistadores following Hernan Cortès (1485-1547) back from the Americas were very small and yellow in colour. 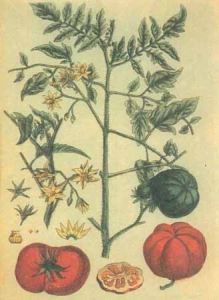 Olivier De Serres (1539-1619) botanist at the French Court cites the tomato in his Treaty on Agriculture as an amusing curiosity to be used as an ornamental plant.  Antonio Latini (1642-1696) from the Italian Marches cites the tomato for the first time in his Scalco alla moderna edited in Naples in 1694 where he describes its use in a recipe for stewed vegetables. 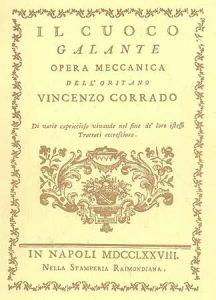 Francesco Gaudenzio (1648-1733) cook to the Jesuits in his Panonto Toscano drawn up in 1705 suggests a mixture of vegetables prepared together in a pan made unmistakeable with the use of peeled, chopped and fried tomatoes.
The botanist and gastronome Vincenzo Corrado (1734-1836) in his Cuoco galante published for the first time in Naples in 1773 describes the tomato as a saffron coloured fruit.
In 1781 the tomato was introduced in Philadelphia in the USA by a French refugee from Santo Domingo and its cultivation was supported by Thomas Jefferson.  Charles Nicolas Appert (1749-1841) previously pastry cook in Rues Quincampoix in Paris, after numerous attempts manages to produce the first preserves in glass jars in his atelier at Ivry-sur-Seine. 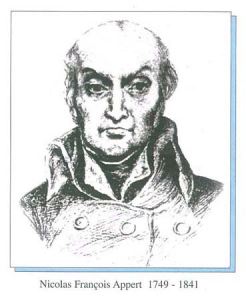 Charles Nicolas Appert publishes in 1804 the Livre de tous les ménages, ou l’art de conserver pleusieurs années toutes les substances animals et végétales with the results of his experiments codifying the process of “Appertisation”.
In 1810 in Englnd Peter Durand presents his patent for a method of food preservation by means of heating within tin containers.  Today he is the recognised inventor of tin cans.  At the Court of Parma, the cook of Maria Luigia, Vincenzo Agnoletti (1776-1826) wrote:”Tomatoes can be prepared in a variety of ways.  The taste is different but they must be red and very fresh”.
Alexandre Dumas (1802-1870) after a stay in Naples, in 1835 describes various types of pizza, most of them still “white”: with oil and garlic, with small fish and finally with tomtoes.  The tomato had conquered the pizza.  Ippolito Cavalcanti, Duke of Bonvicino, (1787-1859) in his Practical Theoretical Cooking published in 1839 codified for the first time, and in Neapolitan dialect, “I vermicelli co’le pommodore”. Thus the tomato met and married pasta!
The famous recipe of Nicolo Paganini (1782-1840) for Genovese style ravioli with tomato sauce was published in 1840.
The tomato appeared in various guises and sauces at a gala lunch offered by the Empress Eugenie wife of Napoleon III.
The Englishman Yates patented the first model of tin opener in 1855.
In 856 Francesco Cirio (1836-1900) opened in Turin the first factory of canned peas, followed in 1875 by the first plant for the industrial processing of tomatoes in Campania, thanks also to the commitment of the Parmesan technician Lamberto Gandini and a local industrialist, Pietro Rovetta.
Carlo Rognoni (1829-1904) in his property at Mamiana in Panocchia was the first to study the tomato and its cultivation, and through crossbreeding found the most suitable quality called Ladino from Panocchia; he introduced field cultivation and in 1874 founded a farmer’s company.
At the Universal Exhibition in Paris in 1878 the Agrarian Committee of Parma presented preserves and tomato sauce in both ‘loaves’ and crystal jars.
According to Ministerial data in the year 1890, 16 processing plants for tomatoes were active in the Province of Parma, with 35 boilers using direct heat and 76 workers producing on average 535 quintals of black preserve in ‘loaves’ per year.

With the utilisation of boules and concentrators, the more convenient and safe production of tomato preserves in vacuum begins.
According to data from the Chamber of Commerce there were 61 plants active in the province in 1912.  These plants processed on average 1,5 million quintals of tomato using 229 vacuum canning plants and offering 50 day’s work to 3.000 people.
On 2nd July 1922 the  “Stazione Sperimentale delle Conserve Alimentari”  (Experimental Research Station for Preserved Food) was founded through the initiative of the Parma Municipality, Province, Industrial Consortium, Cassa di Risparmio savings bank, the Bank of the Agricultural Association, the Chamber of Commerce and the commitment of Giuseppe Micheli (1874-1948) and Antonio Bizzozero (1851-1934). This body had the task of overseeing innovation and expansion in this field.
On 15th May 1939 the decree for the setting up of the Parma Preserves Exhibition was published in the Official Gazzette.  This show was an initiative of the Experimental Research Station, the Municipality, the Province, the Chamber of Commerce and the Industrialists of Parma.
The first exhibition of food preserves, the “Mostra delle Conserve” was held from the 1-20 September 1942 in the pavilions of the Ducal Park in Parma giving rise to a series of specialised manifestations which are still active today under the name of Tecnoconserve and later Tecnocibus.
In the new Trade Fair area built alongside the motorway ‘of the sun’, Cibus was inaugurated on 4th May 1985, the first International Exhibition of Food products, evolved from the historical “Mostre delle Conserve”. 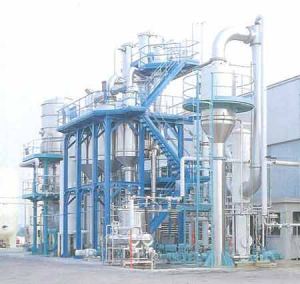 At the beginning of the new millennium the Parma canning industry is composed of 11 plants and processes annually more than 10.000 quintals of tomatoes and provides more than 20% of the entire national production of tomato derivatives.